Where now for secular humanists, atheists and other moral relativists who profoundly disagree with the Ashers ruling? The outrage currently coming from their various corners is palpable, but it only highlights their inconsistency when it comes to the Moral Project, and exposes their faulty understanding of human rights and what it means to be human.

Let me explain. Human rights can only come from one of three sources: 1) God, 2) Nature or 3) governments. Those who subscribe to an atheistic and/or strictly secular worldview reject God outright. Grand. That leaves Nature and governments. We can all agree, I think, that Nature is an amoral and impersonal force that thrives on violence and discrimination. Nature might bless you with the genes needed to live a long and prosperous life, or it might chuck a tree at your caravan. So that’s Nature out. That leaves governments – which brings us to the Ashers case.

As far as strict secularists and the Ashers case are concerned, the highest court in one of the most enlightened and progressive civilisations on earth has ruled emphatically that what they sincerely thought was a human rights violation was in fact nothing of the kind. On what basis can they now argue otherwise?

This was a question posed to the pro-life community when the 8th Amendment referendum result went against them. But there’s a key difference. The dominant view among pro-lifers is that the State does not get to hand down human rights. The State’s only job is to protect the human rights that already exist by virtue of you simply being human. Abortion, therefore, will always be wrong, regardless of what the State says because it unjustly takes the life of a scientifically-proven-to-be human being. And so, like all social reformers worth their salt, pro-lifers understand what it means to be human, and are able to remain consistent in their philosophical convictions by opposing the State and continuing to fight for the rights of unborn humans.

This view, of course, is rooted in the Judeo-Christian idea that all human beings are created equally and imbued with intrinsic value and purpose. In other words, human rights are an objective feature of reality above man’s ability to change. This, of course, is a scandalous and radical departure from secular atheism.

Secular atheism, on its own terms, cannot account for human worth or dignity because such things simply don’t exist. They are social constructs arbitrated by those in power – like those who ruled against Gareth Lee. So where do secularists turn now? What are their options?

The European Court of Human Rights? Possibly, but there’s every chance that could go the same way. The universe? Ha. The universe hates you. Shit happens. What about the doctrine that underpins the entire atheist enterprise, Darwin’s Origin of Species? Well, if Darwin was right, human beings are just slabs of talking meat. Some will get lucky, some will get devoured. There’s no secular hope to be found there, either. 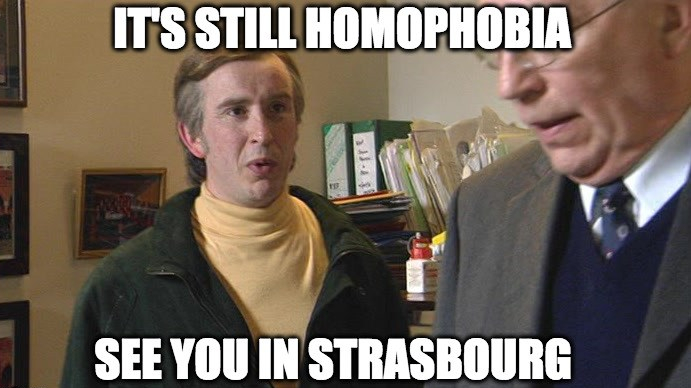 No. All they have are the laws given to them by the State of whatever country and time period they happen to be in. And what the State giveth, the State taketh away.

That’s not to say that proponents of secular atheism can’t oppose unjust laws. They can and do. And many of them do a great job of it. But they do so in contradiction to how they believe reality to be. Any secularist of any stripe who thinks otherwise is halfway to theism, so why not save all this public inconsistency and join us theists, completely? You’d still be wrong about the Ashers ruling, but at least you’d know on what grounds.