The journalist and atheism populariser Christopher Hitchens once stated that atheists are as good as Christians, going so far as to challenge believers to name one good deed they can do that an atheist can’t. Indeed, the atheists I know say similar things, and some atheist organisations in America even put up billboards to make sure everyone knows it.

And they’re not wrong; it is perfectly possible to be good without God. It is demonstrably true that there are many virtuous and loving and kind atheists in the world. No thoughtful theist would say otherwise.

But that’s not the argument. There’s a much deeper issue at play here – the grounding issue. And this is where Hitchens and the billboards fail in their understanding of a rather basic theist argument. 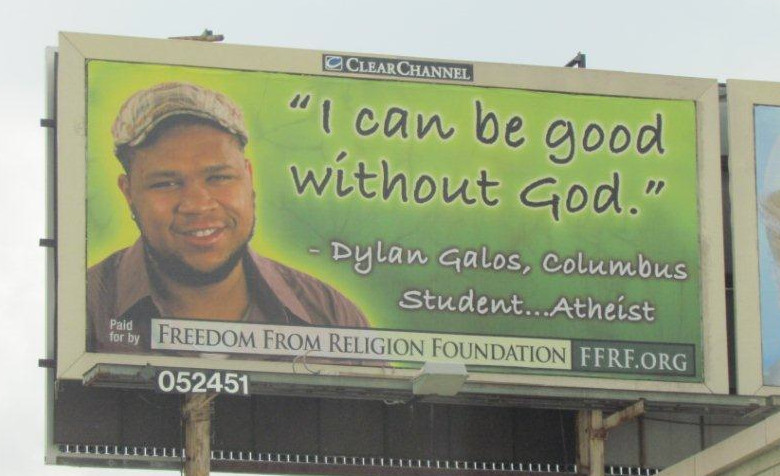 Nobody is saying you can’t be. How much did this thing cost?

The theist is primarily concerned with the ontology of morality – that is, the nature and existence of morality – not whether theists are nicer than atheists (because they’re not). In other words, theists want to know how atheists can ground morality given that the universe has no particular thing guiding the designation of what behaviour is good and what is bad.

On atheism, humans are nothing more than the accidental byproduct of time plus chance plus matter, skin-sacks of recently-evolved atoms fizzing around a tiny speck of cosmic debris called Earth. Some humans fizz violently, some fizz peacefully – all of them destined to be cooked alive at some point by global warming/climate change or something. So, within this framework, it’s hard to think how anything can be objectively good. Why is human flourishing more of a good than mosquito flourishing? With atheism, it can’t be.

Atheism, then, when taken to its logical conclusion, has a crisis of value. In other words, human beings are just animals – no more or less valuable than any other living thing – and animals have no moral obligations. We don’t arrest cats when the mutilated corpse of a mouse turns up on our doorstep. Cats kill mice, they don’t murder them. There is no moral dimension to animal behaviour.

In response, an atheist might say that certain actions such as murdering babies for fun and incest may not be biologically and socially advantageous, and so over the course of human evolution have become ‘not good’. Fair enough. But that tells us nothing about the actual wrongness of these acts, it only tells us that cultural opinions change over time – and could change again (if incest apologists like this guy have their way).

So when atheists use the word ‘good’ to describe themselves, they beg the question: what do you mean by ‘good’? If the term ‘good’ is a manmade social convention to aid survival, then the categories that make up good are also manmade. But here’s the thing: different people have different ideas about what is good and what is bad. In some cultures they love each other, in other cultures, they eat each other. Which do you prefer?

So, yes, an atheist can mimic all the behaviours of what their particular time and culture calls ‘good’ – and they can do it rather well. But if atheism is true and there’s no God to ground morals to begin with, then – just like like the rest of the animal kingdom – human beings have no objective moral duties. Judging an action based on ‘good’ or ‘evil’ would be like expressing a preference for what type of Danish pastry is the more superior (maple and pecan plait, obviously).

Therefore, on atheism, the word ‘good’ has no meaning. Or, as the captain of Team Atheism Richard Dawkins eloquently put it: “There is, at bottom, no design, no purpose, no evil, no good, nothing but pitiless indifference.”

2 thoughts on “Can atheists be good without God?”